How We Used JTBD to Analyze Apple's Worth

Way back in 2014, we tried to analyze Apple using Jobs-to-be-Done theory and basic company valuation methods to figure out how much Apple was worth. At the time, Apple's market cap was $452 billion and, by our estimates, we thought it ought to be worth approximately $3.2 trillion.

On January 3, Apple hit a $3 trillion market cap, making it the most valuable company in the world currently, and the most valuable company to have ever existed. With this recent announcement, we wanted to revisit our first ever "How Would You Beat?" episode where we discussed what makes Apple so successful and how competitors can beat them using Jobs-to-be-Done methods.

How Did We Calculate Apple’s Value?

Our original valuation of Apple was based on an analysis combining Jobs-to-be-Done market disruption theory with Warren Buffett's Intrinsic Value Model. Part of the analysis was done in a basic spreadsheet (email us if you’d like to get this spreadsheet), but the model itself is based on the premise that your series of cash flows over time has an inherent value today because you discounted back. The key is to figure out how much profitability the company has, which can be accomplished by reading basic financial statements.

What you should be focused on is free cash flow. How much cash is available for what Buffett calls the “Owner's Equity”? If 100% of a company is owned by 100% of the shareholders, after they pay off the debt and interest, then that cash is technically owned by the shareholders. They could distribute it all, except companies would much rather reinvest it for future growth. What you're looking at is the owner's earning number, and that's your profitability model.

Even though we were valuing a public company (and its publicly traded equity), this is actually the same analysis every product team should be doing.

When doing valuations like these, it’s also helpful to look at two different, but connected, innovation theories. One is market disruption. This is where companies are able to grow but then a competitor enters the market with a product that gets the job done worse and begins taking over market share. Back in 2014, being a $450 billion company was an enormous deal. Apple was already huge and big name investors like Carl Icahn got out at that point thinking it couldn’t keep growing. This leads us to the second innovation theory: growth rates.

Here, the key is whether you believe the company is in big enough markets to grow their profits over time or, at the very least, maintain them. Something we ask the companies we work with all the time is, how do you know that your product roadmap isn't like Blackberry’s? That it's actually like the iPhone’s? In BlackBerry's growth case, the “growth” went negative. When your growth goes negative, you go from an $80 billion market cap – like BlackBerry – to effectively zero. The growth rate is everything but it’s also the great, unknown mystery. When you're discounting back your cash flows, you're looking at how much those cash flows are going to grow. If you think they're going to shrink, then you should short the stock. That's the growth rate analysis and there is nothing better at practicing this type of thinking and analysis than Jobs-to-be-Done.

It's not difficult but it is a different way of thinking about companies that are building products and why those products are valuable to people. If companies are very good at living in their customers' shoes, empathizing with their struggles and problems, that’s a good indicator of future success. At the end of the day, it’s all about customer value and helping people in their lives. You could look at Apple and easily argue that they have been so successful because they took a different approach than everybody else by going directly to the end consumer.

Over a one- to three-year investment time horizon, it’s easier to evaluate what a company is planning, if it’s going to get the job done any better, and whether or not it will generate value for the customers. In the case of Apple, however, their growth story really happened over an eight-year time horizon, from 2014 to 2022. Apple didn't know what it was going to launch in 2022 way back in 2014 and we didn't either.

This is why it’s so important to distinguish between a company’s roadmap and how that roadmap is generated. Roadmapping is a never-ending process where you're constantly trying to figure out what the path is to continue to innovate. It’s necessary to have a process where you and your team can answer several questions:

Steve Jobs famously said he was proud of all the things they said no to as he was of all the products they actually ended up making. Great thinkers know what to say “no” to. There are two parts to this mindset you must understand:

Going back to the discussion of market disruption, it wasn’t hard to see that Apple had already developed a comfortability with disruption. They disrupted themselves by destroying the iPod before anybody else could (this, unlike Sony, who hung on to the Walkman for way too long and just lost share). Apple developed and launched the iPhone, effectively making the iPod extinct. There was a lot of turmoil around that decision but they ended up following Clay Christensen's advice about how to disrupt yourself: isolate your teams, make sure they have a different set of goals and different incentives than the core business, and then you have a chance to disrupt yourself.

You can also look at the extensibility of the App Store platform on the iPhone and its ability to expand beyond its current value for the customer as a good example of why they were likely to generate growth. Blackberry didn't have an app store. They weren't very extensible. They had apps that didn't do much beyond messaging and it was hard to see how they were going to grow beyond the core jobs that they were good at.

It’s the platform that causes people to underestimate the size of the markets that Apple is going after. They’re not in the market for phones. Yes, people are technically purchasing a thing called an iPhone, but they're actually “hiring” it to get many other jobs done in their lives. Apple asks themselves, what job is the Apple Watch getting done? What jobs can the iPhone get done? What jobs can the iPad get done? What jobs do the MacBook and iMac Pro get done? That is a great way to build a multi-platform, multi-job defensible "moat", so to speak.

So, How Do You Beat Apple?

You want to have multiple jobs that you're getting done for the customer. You want to make sure you understand each of the products that you're building and what their capabilities are against the job. You want to make intelligent platform decisions while also taking almost no risk. Apple actually takes very little risk because they optimize around what customers are doing today, and then look forward to what the next capability is. They want to be at that moment in time when their technology can get the job done much faster and more accurately than their competitors. It’s not about who makes the first move but who moves and gets the job done incredibly well.

The reason why our 2014 prediction was so accurate is that Jobs-to-be-Done is accurate. If you analyze Apple against its competitors' ways of thinking, the key differentiator is that they are more Jobs-to-be-Done focused than their competitors. If they continue with this approach, there’s no reason why they can’t continue to make a difference in even more meaningful consumer jobs, even beyond software and computers.

If you want to learn more about thrv and the Jobs-to-Be-Done done theory behind the business, reach out to us by sending us a message or leave a comment below. You can also sign up for a 30-day free trial of thrv to try our software and access many more Jobs-to-be-Done resources! 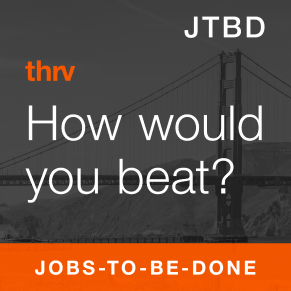