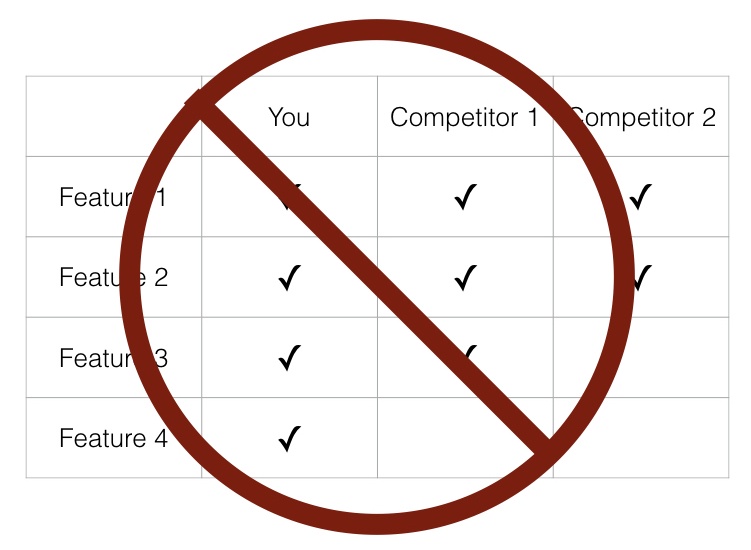 With Jobs-to-be-Done competitive analysis, we don't count features, we analyze the speed and accuracy with which competitive solutions satisfy the needs in the job.

Jobs-to-be-Done helps teams avoid the traps of feature to feature comparisons with one key insight:

Customers don't want features; they want to get the job done.

While Microsoft's Zune was failing, Pandora was adding 90,000 music listeners per day with one feature: enter song, push play.

In Jobs-to-be-Done competitive analysis, instead of counting features, we determine the speed and accuracy with which customers can satisfy the needs in the job with competitive solutions. If the existing solutions satisfy the needs slowly and inaccurately, they have a weakness that can be exploited. This leads teams to developing new ideas that can satisfy needs in new ways that beat the competition, rather than replicating feature sets.

Here are the steps to execute Jobs-to-be-Done competitive analysis:

The speed and accuracy with which the competitive solutions satisfy the needs are the benchmark for how good your new solution needs to be. If it does not satisfy the needs much faster and significantly more accurately, you have not given the job executors sufficient incentive to switch to your product.

Jobs-to-be-Done gives teams a target for creating switches and growth. It answers the question, "Is the solution idea strong enough to take market share?" and frees teams from playing "feature catch-up" with products that are similar to their competitors'. Lastly, it ensures teams are aware of competitive threats from all sides and provides the means of beating them.

thrv is the first and only jobs-to-be-done software for product strategy and product management. Learn more

How To Do JTBD